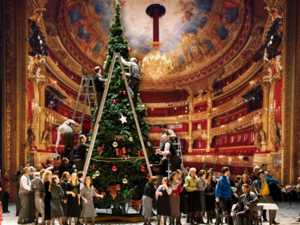 A capella or accompanied on the piano by Alberto Moro or the organ by Benoît Mernier, the 40 choir members of la Monnaie - de Munt gave a highly exceptional Christmas performance under the direction of Martino Faggiani.

La Monnaie has had its own choir since it was created in the beginning of the 18th century.  Its workforce changed over time, according to its repertoire and guidelines.

Since 1981, the Chorus has been successively led by Gunther Wagner, Johannes Mikkelsen, Catherine Alligon, Werner Nitzer and Renato Balsadonna and Piers Maxim.  Martino Faggiani became the Chorus Master in 2011.

The choir plays a major role in the Opera house, but it also focuses on the symphonic and choral repertoire.  Although the Chorus regularly performs with the "la Monnaie Symphonic Orchestra", it is also often invited to join other ensembles for concerts or other musical events.

Since 2000 he has been chorus master of the choir of the Teatro Regio in Parma, but he is also in demand as a guest conductor by the Chœur de Radio France in Paris, the Belcanto Chorus, a company in residence with the Reatefestival in Rieti in Italy, and others. He works with conductors like Bruno Bartoletti, Sir Colin Davis, Rafael Frühbeck de Burgos, Riccardo Muti and Youri Temirkanov. His discography includes a recording of Assassinio nella cattedrale (Pizzetti) for Deutsche Grammophon, works by Verdi (Ernani and Macbeth) and Marino Faliero (Donizetti). His greatest successes include his collaboration with Gianluigi Gelmetti on Œdipus Rex (Stravinsky), Aida (Verdi) at the Teatro San Carlo in Naples, Novae de infinito laudes (Henze) and Juditha triumphans (Vivaldi) conducted by Alessandro De Marchi.

Since 2011 he has been Chorus Master of the La Monnaie-de Munt Chorus.