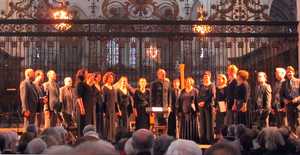 Christmas songs and Vespers by Rachmaninov

The Flemish Radio Choir was founded in 1937 by the Belgian public broadcaster of the day. Today it has become a choir of exceptionally high quality that counts both domestically and internationally among the top ensembles. The 24 professional singers rehearse under the baton of chief conductor Hervé Niquet in Studio 1 of the well-known Flagey building in Brussels, and perform throughout Flanders and Europe.

An atmospheric but unusual Christmas program – this is something in which the Flemish Radio Choir is a past master. Rachmaninov's orthodox Russia comes to life in his absolutely beautiful Vespers: perhaps one of the most imposing liturgical choral works ever written. This is followed by American Christmas carols, classics made famous by crooners such as Bing Crosby or Frank Sinatra. "Dreaming of a white Christmas"!

Hervé Niquet became the choir’s chief conductor in 2011. This internationally celebrated and flamboyant conductor is key to the choir’s success. Niquet, who refers to the choir as a diamond and ranks it among the top three in Europe, works on achieving a recognisable sonority and is planning a wide range of projects, from unknown French romantic music to contemporary premieres.

A first and important pillar of the Flemish Radio Choir’s programmes is the a capella concert, with which the ensemble tours between four and six times a year throughout Flanders. In addition, the choir regularly works with renowned national and international instrumental ensembles, such as the Brussels Philharmonic, the Brussels Jazz Orchestra, the Rotterdam Philharmonic Orchestra, the Sinfonia Warsowia, Le Concert Spirituel and the Royal Concertgebouw Orchestra.

Besides its close ties to regular partners in Flanders, the Flemish Radio Choir is increasingly expanding its presence on various international stages. The choir is a particularly welcome guest in France, and receives more and more invitations each year to both festivals and prestigious concert halls such as the Salle Pleyel and the Théâtre des Champs-Elysées in Paris.

The number of concerts it performs in the Netherlands is also on the rise, and the choir is enjoying increasing interest in Italy thanks to its collaboration with the Palazzetto Bru Zane, which took the initiative to launch the prestigious CD series based works composed for the Prix de Rome. This international recognition also applies to the Flemish Radio Choir’s CDs, which feature many works of the great chamber choir repertoire.

The Flemish Radio Choir also retains its unique status as radio choir: a considerable number of concert productions are recorded by Klara, as a result of which the choir has built up a unique collection of live recordings, including works by Flemish composers.

The Flemish Radio Choir is an institution of the Flemish Community. Its media partners are Klara, Cobra.be and Roularta. The suits of the gentlemen members of the choir are provided by Café Costume.