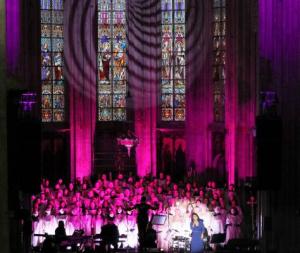 Gospel for Life, quite a story…

Since December 2006, over 100 Gospel for Life concerts have been given in Wallonia and in Brussels to the benefit of humanitarian organizations. The first 10 tours attracted close to 90,000 enthusiastic individuals who came to enjoy the vocal colours and humanitarian dimension of the concerts.  Each evening, no fewer than 200 singers are on stage along with some great stars of gospel music. The results exceed the expectations by far as cathedrals, collegiate churches, abbeys, houses of worship and theatres alike are filled to capacity.

Emotion-filled songs to fight indifference, to save lives and to remind everyone of the battle waged on a daily basis by NGOs and other associations in order to overcome sickness, apathy or social injustice.

This year they propose a colorful spectacle, full of energy and full of emotion and this under the musical direction of Didier Likeng and with the gospel star Sandra Mbuyi.

Born in Yaoundé, Cameroon, Didier Likeng is a self-taught musician with solid choir and stage experience. From a very early age, he develops a passionate interest in Negro Spiritual and Gospel, which he already sings in a church choir at the young age of 11.
Aged 13, he organises and conducts several musical groups in Cameroon. Two years later, he becomes not only the choirmaster of a 60-singers strong ensemble, but also the conductor of his school orchestra.  After completing his secondary education in Cameroon, he arrives in Belgium in 1989 to study agro-industry at the university, from where he graduates in 1995. However, this young engineer and passionate musician decides to embark on an artistic career.

Didier plays various musical instruments, and does so very skilfully. He is also a singer of great talent. He is passionate about Negro Spiritual and Gospel music, which he has been studying and practicing for several years. Very quickly, he has become one of the leading figures of Gospel music in Europe. He is considered by his peers to be a talented and innovating artist, driven by his Faith. He performs with many professional and semi-professional groups in Europe and has accompanied many artists worldwide, either as musical director, instrumentalist (bass guitar, keyboards) or singer. Moreover, Didier is a songwriter, arranger and artistic creator who has produced and recorded over 100 CD albums in professional studios for artists of different styles. In his capacity as singing teacher at the well-known Barcelona institute ESMUC (Escola Superior de Música de Catalunya) since 2005, Didier Likeng is regularly invited to host Master Classes and Workshops of Gospel music worldwide (Spain, France, Poland, Switzerland, Belgium, the United Kingdom, Italy, Luxemburg, The Netherlands, Germany, the USA, Canada, the Caribbean…).
Between 1990 and 2002, he is a member of the prestigious French Gospel group, The Black and White Gospel Singers. In Belgium, he conducts, amongst other groups, The Zion Gospel Spirit, The Gospel Wings and The Marvellous Gospel Singers. The latter, since its inception in 1992.

As choirmaster and soloist with one of the greatest Gospel choirs in Europe, Paris-based “Gospel pour 100 Voix”, he is the initiator and animator of a string of vocal ensembles throughout Europe, and has been the mastermind behind various musical projects. His adaptation of a selection of J.S. Bach’s works, Bach to Gospel, for the musical event “La Nuit Musicale de Beloeil” was a huge success. He is also the instigator of the “Sky” (mixture of Gospel and Suffi) project with Melike, famous Turkish-born singer. Among other great artists with whom he has had the opportunity to share the stage, one finds The Five Blind Boys of Alabama, Rhoda Scott, The Golden Gate Quartet, The Campbell Brothers, Liz Mc Comb, The Dixie Hummingbirds, Emmanuel Djob, Marcel Boungou and M. Ngasi. With them, he totals more than 3.200 concerts.

Now, Didier has added the concerts of the Gospel for Life tour, which he joined in 2008 with a desire not only to support efforts undertaken by associations aiming to improve human welfare, but also to share his passion for Gospel chant with amateur choral singers who express their solidarity in favour of life.

He offers us a vibrant and emotion-filled show.

Sandra Mbuyi was born in Kinshasa, Democratic Republic of Congo, on July 28, 1984. She is the youngest of a family of seven children.

Sensitive to music since childhood, it was in 1995, at the age of 11 that she sang for the first time in a choir, "the Voice of Angels", in the Kinshasa ACEM church.

In 1997, she attends the Baptist Church (CBFC Lukusa) and joins the musical group SFJC (Soldiers for Jesus Christ). It is thanks to her performances with the group that she acquires her stage experience and maturity.

For many years, Sandra accompanied various artists and bands, on stage as well as in the recording studio.

With the experience of these collaborations, grows Sandra’s ambition to record her own album. In March 2006, a first single is released:  "Nzambe na ba Orphelin".

It was the following year, in July 2007, that she released her first album, "Na loboko ya tata", which was a huge success.

Sandra has also given numerous concerts in Africa and in Europe (Belgium, France, Germany, Luxembourg, The Netherlands, Denmark, Switzerland ...)

She is happy and honoured to lend her voice and talent to the Gospel For Life tour, which she joined in 2016.

Program of the 8th Concert des coeurs : (still to be confirmed)